We are looking for musicians and colorguard members of ALL ages young and old to join us in celebrating music. It doesn’t matter how experience you are or how long it is since you’ve played, get an instrument and join us!!! The More the Merrier!!!

Not a musician? We can use banner carriers (4), and volunteers to walk alongside the group with first aid supplies & water. 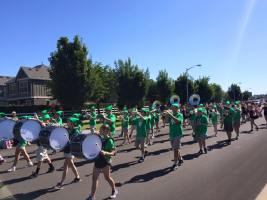 Rehearsals will held in the Sherwood High School Band Room at 6:00pm on these dates:

Thank You Adams Screenprint for our Shirt Logo & for providing the band shirts for free!

If you are interested in joining the band or have any questions you can email Brant Stai at bstai@sherwood.k12.or.us or call 503-825-6380. Looking forward to having you on board!